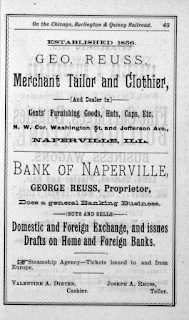 While progress has replaced many of Naperville’s earliest structures, not only does George Reuss’s business building still stand but so does his home. And both are fine monuments to his maxim that "industry and economy lead to wealth."

Trained as a tailor, Reuss left Bavaria in 1854, remaining for a time in New York until moving west to St. Charles, Illinois. Mathias and Gertrude Krapf, a family he knew from back home, also settled in St. Charles, bringing with them their daughter who was an old school friend of George’s. In 1856, Reuss married Anna Maria Krapf, moved to Naperville, and started a store with “a Mr. Dollinger.” This is possibly Franz “Frank” Dollinger as he also lived in St. Charles for a time and was a member of Euclid Lodge, the Masonic organization in Naperville. The partnership didn’t last long, however, and they split up the stock to go their separate ways.

Now in his twenties, Reuss operated a clothier’s shop which sold men’s furnishings and utilized his tailor training. His obituary states that while Reuss was “a stern man, he was eminently just and demanded much more of himself than he did of anyone else” and his business seems to have flourished. In the 1860s, Reuss hired local contractor, Levi Shafer, to erect a fine clothing shop on the corner of Washington and Jefferson. In addition to being a successful builder, Shafer is known for loaning his gun to Marcellus Jones who is said to have fired the first shot of the Battle of Gettysburg with it.

Reuss’s good reputation and sturdy building impressed the farmers and townsfolk who were his customers and they started asking him to hold their money. So the clothier became a banker, launching the Bank of Naperville in 1886. Isaac Murray, brother to the Ruth that I wrote about in my first book, was vice president of the bank.

George installed a vault and added another room and rebuilt the entrance with elegant red granite to better reflect the change from tailor to bank. These additions cost him $13,000, equivalent to $397,117 in today’s dollars, and the fancy entrance now opens into Zazú Salon.

Over the years, Reuss also served a few terms as town trustee and in 1880, he was president. But there were difficult times for the Reuss family as well. Of the nine children born to Anna Marie, five died in infancy and one before her fifth birthday. The three remaining children prospered, however, providing thirteen grandchildren between them. As an adult, son Joseph joined George in the banking business, as did son-in-law, Valentine Dieter. 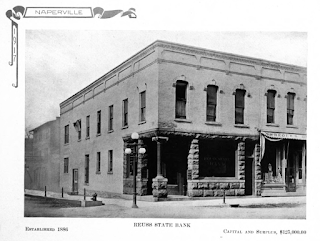 The younger men’s responsibilities, naturally, increased over time, particularly when George was felled by a series of strokes. After two years of being home-bound, George passed away in 1901.  His wife continued to live in Naperville until her death in 1907 and both are buried in Saints Peter and Paul Cemetery.

During the late 1870s, George and Anna Marie had a beautiful home built in Naperville for their family to enjoy. It was designed to resemble the villas found in northern Italy, which was a popular trend during that era. The home of Willard Scott, who also ran a store and bank on Washington Street, is another fine example of Italianate architecture.

The grand house was eventually split up into a six-flat, but it received a big make-over in the 1990s, returning it to its former glory as a single-family home. In 2013, North Central College purchased the beautiful building to house then-incoming President Troy Hammond and it remains the college president's home today.

History is the ultimate "reality show!"

And I'm hooked on the drama! A history fan by inclination rather than by education, I use my background in writing, art and technology to share stories from the past with folks today.

My first book was "Ruth by Lake and Prairie" to tell the story of how the founders of Naperville sailed across the Great Lakes in 1831 through the eyes of twelve-year-old Ruth Murray, Joseph Naper's niece.

This blog helps me find new inspiration and turn history into tasty bite-sized chunks for other history fans -- like you!

Want to know more? Feel free to take a gander at my website at kategingold.com.