From the 1874 DuPage Atlas – Frederick Long 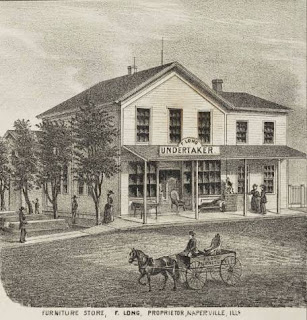 At sixteen years old, Fred Long emigrated from Stuttgart, Germany in 1853 and was living in Naperville by 1856. There is no record of his parents living or being buried in Naperville, so it’s possible he was alone. Fred worked as a cabinetmaker in town and he prospered, opening his own shop as early as 1861.

Also in 1861, he married Amelia Beidelman, the oldest of ten children born to William and Eliza Beidelman who arrived in Naperville around 1847. Of course, the Civil War was just starting during this time and Fred was drafted in 1863, serving in the 49th Infantry, and was mustered out as a sergeant.

Fred and Amelia’s only child, Charles, was born in 1868 and the family enjoyed being active members of the town. Naperville’s fledgling fire department started in the 1870s and Fred became a volunteer of Rescue Hook and Ladder Company in 1875. 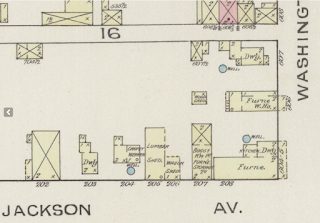 The illustration from the 1874 Atlas shows the F. Long storefront with an addition to the side. The Sanborn Map from 1886 describes this addition as a “dwelling,” so it seems the Longs may have lived next to their shop.

During those days, woodworkers made coffins as well as furniture, as described in his advertisement. Fred also served as an undertaker and attended mortuary school in the 1880s to expand his business even further.

James Nichols, who was a professor at what was then known as North-Western College, partnered with John Kraushar and Fred to launch the Naperville Lounge Factory in 1893. They hired Nichol’s student, Peter Kroehler, as a clerk. The business – and Kroehler – both flourished. Kroehler became a partner in 1896 and bought the company in 1916.

Fred and Amelia’s only son, Charles, died at age 30, married, but childless. One of Amelia’s nephews, Oliver Beidelman, who was already working with Uncle Fred, wound up taking over the furniture and the undertaking businesses, passing both along to other family members. It was Oliver who, along with his son “Dutch,” built the brick Beidelman’s Furniture store that is currently on the corner of Washington Street and Jackson Avenue, replacing the shop pictured in the 1874 Atlas. While the funeral parlor space there is still visible, the Beidelman funeral business moved to another downtown location and one in south Naperville. 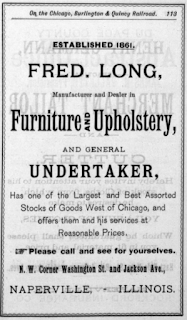 By 1911, Fred’s health was failing and his nephew was running the business. He was cared for by Amelia and her sister Ella until his death in 1912 at age 74. The sisters lived together until Amelia died in 1922 and her Beidelman relations continue their business pursuits in Naperville today.

History is the ultimate "reality show!"

And I'm hooked on the drama! A history fan by inclination rather than by education, I use my background in writing, art and technology to share stories from the past with folks today.

My first book was "Ruth by Lake and Prairie" to tell the story of how the founders of Naperville sailed across the Great Lakes in 1831 through the eyes of twelve-year-old Ruth Murray, Joseph Naper's niece.

This blog helps me find new inspiration and turn history into tasty bite-sized chunks for other history fans -- like you!

Want to know more? Feel free to take a gander at my website at kategingold.com.