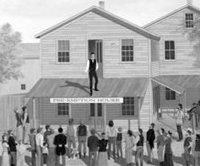 On Monday, President’s Day, the Naper Settlement tweeted about the “urban legend” of Abraham Lincoln speaking from the roof of the Pre-Emption House. The story is an old favorite, but sadly, it may not be true.

If you have been to the “Brushstrokes of the Past” exhibit at the Settlement, you have seen the event as depicted by artist Les Schrader. This oral history tale has been repeated for generations, but no corroborating evidence has ever been discovered.

In 1858, Lincoln ran for Senate against Stephen Douglas. Naperville strongly supported Douglas and his party. In fact, Joe Naper’s nephew, R.N. Murray, was a close friend of Douglas’s. Chances are slim that Lincoln would have bothered to make a campaign stop in opposition territory.

But Lincoln did work with Joseph Naper when both were elected to the Illinois General Assembly in 1836, so certainly Lincoln knew about Naperville.

Both Lincoln and Naper started their terms of office with specific agendas:  Lincoln wanted the state capitol moved from Vandalia to Springfield and Naper wanted to create DuPage County separate from Cook. In order to get the votes they each needed, there’s some evidence that they men did a little “log-rolling.” Just as neighbors help each other roll logs to build each other’s cabins, the statesmen helped each other build support for the vote.

Lincoln also may have been in Aurora. It’s definite that he was a circuit court lawyer in this area and he was hired by Charles Hoyt, an Aurora businessman, to defend a millworks patent lawsuit. They wrote to each other and another oral history says that he visited Hoyt’s store in the 1850’s.

Ten-year-old Isabelle Landry recalled being sent to the store by her mother where she met a tall man with a tall hat visiting with Judge Pinney. Hoyt asked her to sing a French song for the stranger who bought her a pennyworth of candy as a reward. Not to be outdone, the Judge bought her another pennyworth, a memorable event that she enjoyed talking about for the next 76 years!